For some bizarre reason I’m walking around this week with a theme tune (that only I can hear hear….obviously) belting away in the background. Oh yes, Europe’s ‘It’s the Final Countdown’ is surround-sound for me these days. Another overdue baby could burst that bubble but right now I’m all about 80’s music, complete with bad hair and dodgy leggings.

My hospital bag remains unpacked. The baby’s clothes are washed and ready and I have most of the bits and bobs that we’ll need but I somehow can’t bring myself to actually pack the bag. I can honestly say that I haven’t figured out yet why I’m dragging my heels. Having gone into premature labour (and thankfully, having it stopped) the first time around, you’d think the old hospital bag would have been beside the front door since week 32. Part of me thinks that I want to wait until maternity leave begins at week 38 so that then, all of the work stuff is gone, and my focus is the baby. It feels almost ceremonious; close the door on work and pack the bag to open the door on the next big adventure. Another part of me reckons that I may just be subconsciously scared of the entire hospital experience and preparing a bag for it makes it just more real. Maybe it’s a bit of both but the bottom line is that bag ain’t packed!

I had to take the train to Dublin for work and discomfort doesn’t begin to describe it. The journey up wasn’t bad as I slept for a big chunk of it. That is one of the bonuses of pregnancy; my newly-acquired ability to sleep just about anywhere. I’ve always been jealous of that amazing skill in my sister. She’s like a cat; can nap anywhere, anytime. Usually I’m a good sleeper but can only sleep in a bed, in the dark, with no noise. Add a growing baby into the equation and I’m a champion snoozer. The journey to Dublin involved a really awkward position, an open mouth and plenty of drool (lucky fellow passengers) but it was a blissful visit to the Land of Nod.

The journey home was an absolute nightmare. Itchy belly and restless legs don’t do well in an overcrowded, sweaty carriage. Add to that a need to use that awful train loo more times than you’d imagine is humanly possible. It felt like every 15 or 20 minutes I was up off my seat, navigating a big belly through a sea of standing commuters. I felt like I should have been wearing a t-shirt that just had the word ‘sorry’ emblazoned on it. The highlight of the journey came when the trolley guy and myself had a face-off; he couldn’t fit past me and, as there were people standing everywhere, I had nowhere to go. I had no energy left to try and manoeuvre myself backwards so the poor guy had to admit defeat and retreat. An older lady glared at me and said as loud as she could ‘Jaysis, I’ve been waiting two hours for that bloody cup of tea’. I was hard pushed to muster any sympathy for her. Yes, pregnancy has made me feel incredibly self-entitled!

I think I mentioned before that we gave away all of our baby stuff with gusto so I was really touched this week when a friend dropped around bags (upon bags) of baby clothes, a lot of which were my son’s eighth years ago. It was a little trip down memory lane but also very satisfying to know that four other smallies had worn the clothes since. They are soft, gently worn and much loved, which I think makes them all the more special. There are little pieces that my sister had sent from Canada, cardigans that a lovely elderly neighbour had knit and teeny leather slippers. All things that I had long forgotten about, but that brought back a rush of memories of my son as a newborn. He also really enjoyed going through the bags, finding it altogether hilarious that his first Halloween costume involved a pumpkin hat and orange leggings. An added bonus is that most of the clothes are neutral – mainly grey, cream, lemon or white – so they will happily be used again.  There are also loads of extra clothes, passed between friends, so I really don’t need to buy a thing. As I don’t like the idea of loads of ‘stuff’, I will probably pass quite a bit to other pregnant friends. I feel really lucky to have great people in my life who are always generous with both their time and their things. With hormone levels at an all-time high, I’ll probably go and have a little cry about that now… 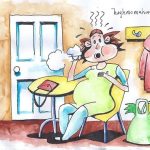 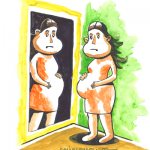