The baby is the size of a watermelon this week, eh? Well no s*** Sherlock. More of a bowling ball disguised as a watermelon. I know the theory is that these final few weeks are when both mom and baby pack on the pounds but wow, it literally happened overnight. I went from feeling like I had a big belly to now just feeling like a giant belly. I have to be helped off the couch and literally roll out of the bed. Another bit of dignity just waved goodbye.

There is a ridiculously obsessive relationship between bikini lines and maternity wards. I don’t think I’ve ever thought so much about the timing of a bikini wax. What if I leave it another week but then go into labour early Vs what if I get it done now and go over? Again, I think it’s a self-survival tactic that I’ve developed, whereby focusing on small, irrelevant things keeps my mind off D-day. My gynaecologist friend spent many wine-fuelled evenings regaling me with stories of things that women say and do in the labour ward. He reckons there isn’t a bikini line apology that he hasn’t heard; ‘I had it booked for this morning Doctor, would you believe, but then I went into labour’. The irony is that he says (with a straight face) that he wouldn’t notice either way.

Don’t fall off your seat or check your computer for viruses but, believe it or not, I have nothing to whine about this week. I’m so busy trying to tie things up at work that I don’t have time to think about what’s annoying me. I’m going to bed a little earlier but that’s a good thing so no complaints on that front. I know that you can’t bank sleep but I’m happy to catch all the extra hours while I can, ahead of the graveyard shifts that will need to be done in the coming weeks.

The end of this week marks what is defined as the ‘pre-term’ stage so I’m feeling less nervous about early labour. If it happens from here on out, things should be fine. Going into labour at 26 weeks the last time around made me slightly anxious about an early delivery so every week that the baby ‘stays put’ has felt like an achievement.

Also high on the ‘loving it right now’ list is the fact that most of my pregnancy-related woes seem to have subsided. Of course, I have probably just given myself the kiss of death and will wake up tomorrow with heartburn, swollen ankles and incontinence. For the moment, however, the itchy belly has disappeared. The nightly heebie jeebies (see Week 29 for the technical definition) are no more! Throughout this pregnancy they were a nightly feature so to be able to sit or lie down and not have to scratch like a neglected cat feels amaaaaaaazing. Of course, I’m pregnant and so, the sudden loss of a symptom required a consultation with Dr. Google. All of the medical and mommy sites are saying the same thing; it’s perfectly normal to have pregnancy symptoms and ailments abate in the final few weeks because the body is storing all of its reserves for labour. Amen to that! 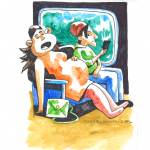 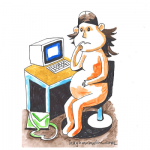