Picky eating is one of the most common issues for parents and the quest for nutritional balance often leads to dinner time drudgery. Most children find some foods unpalatable – vegetables are usually top of the offender’s list, while sweets rarely are. There are a few ways to reduce the stress of those broccoli battles:

– Avoid forcing food on a child: This only creates negative associations. If something goes down like a lead balloon, just re-try at a different time and in a different way (maybe baked instead of boiled).

– Offer choice: Put corn and peas on the plate and explain that while it would be great if both were eaten, only one can be left. Choice makes children feel empowered and they generally react well.

– Set a mealtime routine: Small tummies respond well to knowing when to expect food so keep meal times as consistent as you can.

– Respect your child’s appetite (or lack of): Learn to read the cues so that you know the difference between when a child won’t eat and when they just doesn’t feel like eating.

– Try not to encourage or bribe: Talk about anything but food at the table. Distraction is a vital tool in the parenting kit! 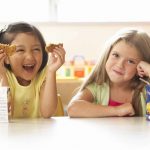 Cutting Down on Sugary TreatsTips on Healthy Eating 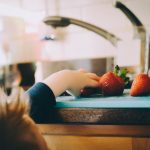