When you put conundrums out there, the universe answers so just a quick update on a few of the suggestions that have worked for me over the last few weeks. This whole pregnancy thing really is trial and error, but I’m always open to advice from the veterans that have gone before me:

Maternity jeans – Topshop won the war with my low-carrying belly. I bought two pairs of their maternity jeans and am delighted to report that I don’t spend most of the day hitching them up or wrestling with a rolling belly band. Topshop maternity wear is also a great match with your regular size so when you’re on the loo, all forlorn at the sight of your giant granny knickers you can take comfort in the fact that your jean tag still has the same number waving up at you as it had pre-pregnancy.

The relentless itch – I haven’t managed to cure this one but Aveeno cream for dry and irritated skin goes a long way in taking the heat out of it. The problem is that I’m going through tubes of the stuff because 30-minute applications seem to be the only way to save myself from some serious claw marks. The local pharmacist suggested Calamine Lotion (would any freckled Irish child in the 70s and 80s have survived summers of sunburn without this magical concoction?) so I gave it a shot. Ok, it cooled the itch but 5 minutes after application it hardened, I stood up and cracks appeared all over my belly and back. The couch looked like someone had stripped a wall of white paint and my clothes were literally stuck to me. Maybe one to be kept for bedtime?

Stretch marks – none yet, and I’m waiting for Bio Oil to call and offer me shares in the company. I’m still slathering it on like there’s no tomorrow. My friend thought she had escaped the veiny blighters except her daughter was 10 days overdue and on the 9th day, they ripped across her belly like Mount Vesuvius on speed. I suggested revenge in the form of giving said daughter DIY bowl hair cuts until at least her 12th birthday.

Prenatal supplements – A now daily ritual thanks to this genius little thing on my phone called a reminder. I can’t believe someone had to actually suggest that to me.

Small boys and big scans – Having tied ourselves up in knots about whether or not to bring our seven year-old son to the growth scan, for a finish we just asked him. He thought about it for a few seconds (rather cunningly, we failed to mention that this would take place during school time) and he decided that he would skip it and ‘wait to see the baby when it comes out’.

To invest in a new car seat or to use the perfectly fine Maxi Cosi one that we bought the first time around? It served our son and two other babies well and we know that it has never been involved in a crash or ‘high impact incident’ so surely it’s ok? I would have thought so but some factions of the Mammy Mafia (why, oh why do I read those boards?) have decreed used car seats the work of the Devil himself, citing all types of recent health and safety research. The only excessive usage ours seems to have had is in the area of projectile spewing so I can’t imagine that we’re putting our small bundle at risk. Still, those voices niggle away……..

I had the growth scan (that’s usually done at 32 weeks) just towards the end of this week. No particular reason for having it earlier other than maternity logistics, I imagine. This could easily have appeared under ‘weekly low’ for the second of sheer panic that set in when the sonographer pulled a face, and asked what weight my first baby had been. I laughed and asked if I should psyche myself up to birth a bruiser, to which she replied ‘quite the opposite, this baby is measuring very small for its gestational age’. Had this been my first baby, I would have cried and then been a complete ball of stress for the remaining 10 weeks. However, this is where a little experience comes to the rescue. Like my friend, I went 10 days over on my son. I think around the eighth day, I took myself over to the maternity and begged to be induced. After a scan I was told that the baby was less than 6lbs and I therefore needed to go home and let nature takes its course. Anticipating the arrival of Tom Thumb, I bought small baby clothes and prepped my husband on how to hold a malnourished smurf. Two days later a very healthy 7lb9oz bundle of blubber arrived into the world.

Although the sonographer could do with a course in ‘appropriate bedside manner for Monday mornings’, the scan was great because, again, it’s that reassurance that things are ticking along as they should be. The scan picture is a bit alien-esque for my liking (how do people actually frame those?), with the big head and skeletal eye sockets. My colleague put it best when he said it was all a bit reminiscent of a Tim Burton character. Still, giant head and bendy legs aside, el Bambino seems to be in fine fettle and that always yields a high.

Yes, pregnancy makes you hungrier but somehow my body has decided that there is a famine pending and I must stock up. I would say that I can’t stop eating but that’s just the wrong verb. Inhaling food would be more appropriate. Even though I’m eating steadily throughout the day and usually have something late in the evening (a couple of hours after dinner), I’m still waking up in the middle of the night hungry. Sitting in the kitchen at 3am, munching through a bowl of Rice Krispies and being judged by the dog isn’t ideal but it beats the alternative – lying in bed, awake for hours thinking about how hungry I am. Nothing at all to do with me. This baby is a little savage. 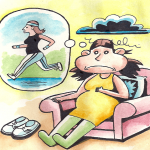 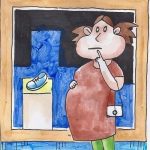