To buy or not to buy baby things? Given that my last pregnancy was eight years ago, all infant and toddler paraphernalia in our house has long been replaced by plastic atrocities and electronics of the Skylander variety. I happily passed on everything from clothes to equipment, content that our family was complete. I now find myself being asked quite often if I’m all set for the baby. Is the nursery done? What ‘travel system’ did I go for? Am I going to buy the mattress monitor or just the regular baby alarm? Is my hospital back packed? Er, no to all of the above.

I know that some women start buying baby bits and bobs as soon as the two lines appear on the pregnancy test and that others wait until the very last minute, sometimes out of a sense of fear or superstition. I don’t think I fall into either camp. My reluctance to fill the house with all things baby-related is most likely down to two things; sheer laziness and an overall belief that babies really don’t need much. You know now that I have administered my own kiss of death. Fast forward to week 37, my waters will break while I’m at work (probably while giving a presentation) and I’ll be over in the maternity asking the efficient Mommies to donate some nappies and onesies to the cause. We’ll then get home and settle the bébé in a bottom drawer while we hunt high and low for the missing nut that holds the whole cot together. Don’t laugh. I’m no stranger to such eleventh hour scenarios.

Not a pregnancy-related physical low this week, more of a social maybe even emotional one. A well-meaning friend – mother of three – told me that she was so excited about my pregnancy because finally we were going to be ‘a real family’. That hit more nerves than a night of leg cramps. So, what exactly have we been up to now? My husband and I only got married when our son was four and long before either (the baby or the wedding) we would have seen ourselves as a family. At the risk of getting overly philosophical, it begs the wider question of how we define what does or doesn’t make a family. Are couples who don’t have children, either by choice or circumstance, not families? I couldn’t hide my utter outrage from my friend who then dug a bigger hole for herself by arguing ‘well, one is a hobby and two is a job’. At that point, I had an out-of-body experience, accused her of all kinds of small mindedness and excused myself so that I could get home to my ‘hobby’. The really odd bit is that we have mutual friends who are in the throes of IVF hell and I couldn’t help but wonder where they would fall in her classification of family; an almost family, a maybe family? Is it wrong to imagine slapping a friend? Given how insensitive the comments were, maybe I wouldn’t even have to blame that one on pregnancy hormones.

I have decided to be proactive and seek some support around breastfeeding before the baby actually arrives this time. It’s a move that has made me really happy. Last time around, firm in the belief that nature would guide me in my endeavours, I reckoned I would figure it out as I was going (the same naïve thinking led me to refuse an epidural during my first labour on the basis that I had packed lavender oil – fast forward 26 hours later and me begging for said epidural). For something that is supposed to come naturally, breastfeeding was anything but for me. Between explosive leaks, a baby who was tongue-tied and had reflux and a complete inability to get a handle on expressing, I think I made every mistake imaginable. Let me share some of my most memorable highlights:

So, in order to be prepared this time, I have made contact with a local La Leche League member, who doesn’t sound at all as scary as the name of her organisation. Nothing like a little bit of lactation support and advice, to avoid wet blue shirts and mortifying encounters with sales staff. The simple act of making that phone call has already taken away most of the nervousness around ‘Milk Gate’ this time around. 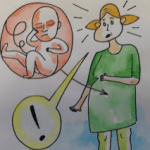 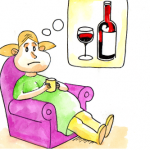