Parenting through grief: It was the best of times; it was the worst of times….

Our family of three was now a family of four and I felt we were now complete. The unbridled joy at welcoming my second daughter is a joy familiar to many. What was different in my scenario was that just under three weeks after my daughter’s birth, my father died.

The absolute conflict of feelings at a time, when emotions are high and near to the surface at the best of times, is not something I would want anyone else to experience. I wrote this piece though because it does happen to an unlucky few and it’s a very unique circumstance.

I couldn’t believe my luck when I got pregnant the second time around, we had been trying a while and I had pretty much resigned myself to the fact that we would be a happy family of three. Four months before this discovery we had had a much sadder one, when my dad’s cancer had been diagnosed as terminal.

My dad was not keen to know about timescales as he didn’t want to feel he had a ticking clock hanging over him, I got it, I wouldn’t like that either. Consequently we tried hard to support him to keep on living rather than to start dying.

I had always been close to my dad and spent a lot of time with him in the months of my pregnancy. I took some time off work to spend two mornings of the week together, while everyone else was at work. We had some lovely times and we had some fractious times, as it isn’t the easiest situation to navigate, particularly when you are pregnant and hormonal.

As my due date grew nearer, the bulk of my attention shifted to our new arrival and I didn’t notice the decline in my dad, or perhaps, I didn’t want to see it. Either way it was a shock to me when he was admitted to a hospice the same week I was in hospital having my baby.

We had some phone conversations that week, hospital bed to hospital bed and my brave Dad travelled to the hospital to see me, supported by the hospice. That he worked so hard to come and see his granddaughter as a brand new baby in the hospital, just like he had his first grandchild, meant a great deal.

When I got home from the hospital I set about settling my baby into the household, like any mother with a new-born. I tried to get to see my Dad as often as possible but between the baby and not being able to drive post-section, I wasn’t there as much as I would have liked. I still feel guilty and sad about that, I would have thought if my father’s days were limited, I would have been there every minute.

I have some nice memories of that time though; a Sunday afternoon visit with my husband and both of Dad’s grandchildren, a solo visit with the baby who was soothed by lying on the bed with her grandad and my eldest daughter’s last visit with me where Grandad was sneaking her a Twix even though I said she wasn’t to have it-typical of my Dad!

My Dad died very quickly in the end, an infection took hold of him and he couldn’t fight it off. He had fought long enough and hard enough. He died the day before my baby turned three weeks old.

Having to be away from my baby while we organised the funeral and all that goes with it was very difficult-they need so much of you in those early days. Wishing I could focus on the arrangements thoroughly without looking at the clock was hard also.

Grief and loss is exhausting at the best of times, add a 5 year old and a new-born into the mix and it’s really hard to fathom. Looking back now, 9 months later, I don’t know how I got through that part of my life. I know this much, without the unwavering support of my rock of a husband and all the help and love that my friends and family gave me; I might have collapsed under the weight of it.

It’s hard to grieve after the funeral also. Logistically, babies don’t allow you to take to the bed or go AWOL for a period. You have to keep on getting up, they don’t allow for emotionally fragile mothers! The elation of having a new baby is also tempered by the devastation you feel for the loss of your parent. After losing my Dad, every time I felt happy to have my two kids, to have this new life, I would immediately feel a crushing sadness.

I don’t have a scintilla of advice for anyone who is facing or experiencing this kind of scenario. All I can say is that, some days I am grateful that my dad hung in there to meet our new family member. I can’t imagine that was easy for him but he loved us so much that he did it. I’m happy that I have some memories and photos of them together-they are so precious. Other days I am furious that my dad was robbed of getting to know this little lady and have the same kind of craic that he had with my eldest daughter.

The word bittersweet is a poor description of how I feel about that short period in my life. It is extremely tough to be preparing to welcome one member of your family whilst preparing to say goodbye to another. It’s even harder to do it. But I think of my Dad working hard to be strong and to experience the joy in living and I promise myself to keep doing the same. 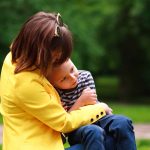 The Miracle of Parenthood: Mindfulness for ParentingHealth & Welbeing