I’ve noticed that sharing birth stories on-line (mainly on blogs) has become increasingly popular and rather graphic. While pregnant I would approach them like I would a trip to the dentist – with one eye open and both legs crossed! Some of them are novellas, others are reminiscent of that 80s B-movie ‘Little Shop of Horrors’.  So, the title for this post is somewhat misleading as I’m not going to write a birth story. If I was to do so it would be short, to the point and along the lines of ‘it hurt, I certainly didn’t enjoy it, it passed’. End of.

Birth documentaries have become as common as EastEnders so channel-hopping while pregnant is like a game of Russian roulette. ‘One Born Every Minute’ is a cross between ‘Grey’s Anatomy’ – minus the room full of beautiful doctors – and ‘Ramsey’s Kitchen Nightmares’. It seems Gordon and women in labour both share a love of colourful language.  Can you imagine anything worse than being in tremendous pain, having your lady bits out for the world to see and…… being filmed for TV? In addition to the pain, giving birth is also an immensely personal thing. There are tears of pain, tears of absolute happiness. You want to kill your partner for ‘doing this’ to you and then you love him sooo much once the baby arrives. Does a cameraman need to be part of that rollercoaster ride? I really don’t think so. Without further ado, I present to you the Cliff Notes version of my ‘birth story’.

Well, quite obviously, that would be the end bit when Baby M finally graced us with his presence. A 7lb13oz bundle of blonde cuteness.

While it may be hard to find many high points of labour, the fact that it was a third of the time of my first one made me very happy. I went from almost 30 hours the first time around, to 7 this time. Everybody told me that it would happen that way because the body remembers what to do. I didn’t buy it, primarily as I had 8 years between both experiences. I reckoned that gave the birth canal plenty of time to develop amnesia. I was pleasantly surprised.

I also remember being completely in awe of what my body had just done. It’s just amazing to hold a tiny baby and realise that your body grew and nourished him, then pushed him out into the world. It’s one of those moments when you realise that being a woman really is tremendous.

While the care that I received in the University of Limerick Maternity Hospital was second to none, some of the practices are a little reminiscent of bygone days. Having been induced three times (yep, my babies like to keep me waiting), I was in an antenatal ward for five days before the baby arrived. The third induction felt a little different and by 6 pm on the Friday evening, I could feel that things were starting to move. Regardless, at 9 pm my husband got his marching orders as the ‘other ladies on the ward need their privacy and sleep’. After he left, a midwife  checked and I was 1 cm dilated. While I felt that was grounds to call him back, the midwife assured me that we had hours yet. By midnight, I was having contractions and biting on a pillow, on my own.  I was 4 cm and know that things were happening much faster than the first time around. I was told that there was still plenty of time and not to bring my husband in. I texted him and told him to come over and wait in the car park. Still on my own and biting on the pillow, just after 3 am I called the midwife. She did an exam, looked slightly alarmed and told me to pack my bags ‘quickly and quietly’ and we would walk over to the labour and delivery ward. I called my husband and then half-walked, half-crawled over. 15 minutes later he finally found me as I was pushing and pleading for an epidural. It is the only point of the whole process that I found so disappointing. I was alone and in pain. It’s not 1965. That ‘rule’ needs to be changed.

What goes up must come down so the price I paid for a faster labour was the phrase that no woman in labour ever wants to hear: ‘Oh love, you’re at 9 cm so it’s too late for an epidural’. I remember grabbing my husband’s arm at that point and telling him that I couldn’t do it. He looked at me helplessly, shrugged his shoulders and said ‘you kind of have to’. Cue a few tears, a few choice words and sheer panic.

‘Would you or your husband like to cut the cord?’ is an odd one for me. While I would consider myself earthy, with a few somewhat hippy tendencies, the reply to that question on both occasions from myself and my husband has been a loud and unified ‘no!’  Funnily, it’s something we didn’t discuss ahead of either birth but just instinctively know that it’s not for us. There are multiple theories as to why you should (it includes the father in the birth) and why you shouldn’t (letting a man cut the physical connection between and woman and child yah-de-yah-da) but our decision wasn’t as well thought out. Maybe it’s the squeamish factor or maybe it’s the fact that we were both so caught up in meeting the baby for the first time, but I was quite happy to let a midwife cut the cord.

Another conundrum is the etiquette around the modern way of announcing the new arrival – enter the minefield that is social media. I had to have a little surgery after the birth because the baby came out quickly enough in the end but the placenta decided to stage a sit-in protest. Anyway, for the two hours that I was in theatre my husband’s main concern was obviously the baby so he called my parents and then posted a quick announcement on Facebook so that the rest of our family and friends would know that the baby had arrived and all was well. We’re still dealing with the fall-out from that! The politics of who knew first and who told would make a great Killinascully sketch. My advice? Send out a blanket text so everyone gets it at the same time.

Full disclosure: I figured that maternity leave would finally give me the time to get out that book I’ve been thinking about writing for years, and update these blog posts weekly. Really, how I was that delusional the second time around I don’t know. I was so time poor and sleep deprived that I finally succumbed to the wonders of dry shampoo and grocery shopping on-line.

So, while I’m keeping a diary of the first year with Baby M, I have only just gotten around to cleaning it up for public consumption.  Loveparenting.ie will post those week-by-week so check back for updates on what went well, what didn’t and all of the titbits I picked up in between. 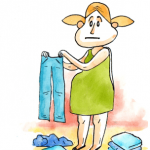