Speaking More Than One Language

The term ‘bilingualism’ means being able to speak and understand more than one language. You may also see the term ‘multilingualism’, and both terms mean the same thing. You do not have to have the same level of fluency in both languages – in fact, you don’t have to be fully fluent at all – to be bilingual. Your native language that you use most naturally every day is called the ‘home language’, and the language used most often in your community – in schools, in shops and so on – is called the ‘community language’. Your child is capable of learning both the home language and the community language at the same time, but if you want some advice on how to help them with this, then read on.

Did you know?  612,000 people in Ireland speak a language other than English or Irish every day.

Is it helpful to be bilingual?

Yes, there are lots of benefits to speaking more than one language. Research has shown that bilingual people are better at multi-tasking, flexible thinking and being able to understand other people’s perspectives. Apart from the advantages for brain development, speaking more than one language at home might have even more benefits for your family. If you or your partner, or your child’s grandparents and other family members, only speak your home language, then your child will need to use the home language to communicate with them. This can help give your child a sense of identity and maintain a connection with you or your partner’s home country and culture.

Having strong skills in their home language helps your child to learn new languages more easily, and it’s never too early to start developing language.

How can I help my child to be bilingual?

You can start by helping your child to learn the home language, and it’s never too soon. Singing songs and nursery rhymes to your child, sharing books together and talking about what you see in the books will all help to build their vocabulary in their home language. Don’t worry about exposing your child to English (or whatever the community language is for you) as they will hear it regularly when they are out and about, watching television, listening to popular songs, and of course once they start attending a crèche, preschool or primary school. It’s more important that you support the home language as much as possible, as this is the language in danger of being lost as the community language is used more regularly by your child.

What can I expect to hear if my child is learning two languages?

Bilingual children can often seem as though they don’t have as many words as other children their age who only speak one language. This is because they might have learned a word in one of their languages only, so their total vocabulary size should be taken as the combination of all their languages. Because of this, your child might often substitute a word from the community language when they are speaking in the home language, and vice versa. When they start school, they will learn lots of new words related to the school setting that they might never have heard before in their home language – for example, ‘homework’ – so when they are trying to talk about their school day with you, you can expect to hear new words from the community language being slotted in to their sentences in the home language. The same thing may happen when they are in school and telling their teacher/friends about what toys they have at home, for example. Their aim is to tell their story and make their message heard, and they don’t mind what language they use to do so. This is called ‘code-switching’ or ‘code-mixing’ and it’s a normal part of bilingualism. This mixing is most common in the earliest stages of language learning and happens less as the child becomes more skilled, but many bilingual adults still use code-mixing when speaking with each other too. It’s nothing to worry about – it’s completely normal, and is actually a good thing, as your child is using all the language available to them to get their point across.

Will speaking an extra language at home cause my child to be delayed?

No – bilingual children learn language in a different way to monolingual children (children who speak only one language), and they may sometimes appear to be slower to talk, but it doesn’t mean that they have a language delay or disorder. It can be very difficult to assess or test a bilingual child’s language as there are very few children like them to compare them to, and their skills in each language will vary depending on how much input they have from each. Over time, bilingual children will catch up with their monolingual peers and usually won’t have any long-term language delay. However, if you are concerned about your child’s development, you can contact your local Speech and Language Therapist for advice.

What if my partner and I have different languages?

There are many different approaches to bilingualism, and it’s important to do what suits you and your family best. Some approaches include Minority Language At Home (MLAH), One Parent One Language (OPOL), Time and Place method (certain languages used in particular settings/situations). A child doesn’t need to learn both languages at the same time – bilingualism can be simultaneous (both at the same time) or sequential (one language first, then the second). As long as your child recognizes a need for both languages, it doesn’t make too much of a difference who speaks which language – if the child knows they need to use one language to communicate with Mum and another to communicate with Grandad, for example, they will be able to recognize the difference. It’s important to give your child opportunity to use their language in situations where it is needed. If your child knows, for example, that you speak both Polish and English, you might find it hard to encourage them to only use Polish when speaking with you. However, if you keep in contact over phone or Skype with family members who can only speak Polish, your child will begin to recognize that they need to use Polish to maintain contact with their grandparents, cousins, aunts and uncles.

You shouldn’t feel pressure to communicate with your child in any language that does not feel natural for you. It is better for your child to build a strong foundation in your home language, by learning from you, before they learn the language of the community.

Remember – when it comes to your child, you are the expert! You have the power to help your family learn more than one language, in the way that works best for you.

This article was contributed by Little Voices. 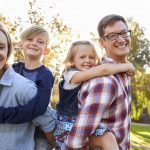 How do I get in contact with a Speech and Language Therapist?Communication, Learning to Talk