Cyberbullying: A Guide for Parents

Must the bullying be prolonged or continuous?

Bullying is more likely to be behaviour that is sustained or repeated over time and which has a serious negative effect on the well-being of the victim. It is generally a deliberate series of actions. Once-off posting of nasty comments on someone’s profile or uploading photographs intended to embarrass someone is not very nice but it may not, by itself, be bullying.

However, a one-off electronic message  is  very  different  to  a hand-written message. The big difference between writing nasty messages on the back of a school book and posting it on the internet is that the online messages can potentially be seen by a very wide audience almost instantly. And, as already noted, the message can remain available on the internet even if it is later removed from the site where it was first posted. In other words, the online message, even if intended to be one off, can become, in effect, permanent.

This article was taken from the ‘Get with it!’ Series “A guide to cyberbullying” 2013. Produced by The Office for Internet Safety, Department of Justice and Equality. You can get further information on general internet safety issues by visiting www.internetsafety.ie

This booklet is intended to increase awareness of all aspects of cyberbullying in the new media world and to help parents and their children understand the often confusing issues of new media technologies and tools which children and young people are using for this behaviour. 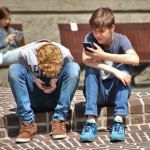 Is my Child a Cyberbully?Middle Childhood, Teenagers